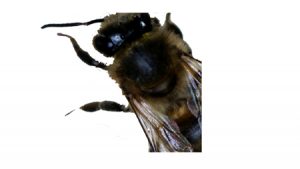 The bee’s eyes, like those of other insects, differ greatly from human eyes. They consist of a pair of compound eyes made up of numerous six-sided facets. They also have three simple eyes. Despite this, their vision is believed to be sharp for a distance of only about 1 m. Bees, however, are capable of seeing ultraviolet light, which is invisible to humans. The bee is capable of navigating by ultraviolet light, which even penetrates cloud cover. Honey bees also use the sun as a reference point to communicate to other bees the angle of flight to be followed to arrive at newly discovered nectar-bearing flowers.

Bees perceived 300 pictures per second as a movement, humans see 24 pictures per second like movement. That is reason why the bees don’t perceive calm and slow beekeeper’s moves, because the slow moves they don’t see as movements. Humans can see the light in the spectrum of 400-800nm, while bees see range of 200-600nm, so the bees can see the ultraviolet light and various shades of white, but can’t see the red color.