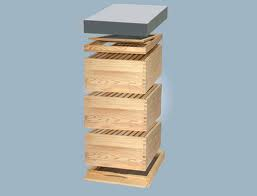 In average Year in late winter, usually in February or March, in continental part of Europe, the queen bee starts to lay a new brood. Very often winter bees’ klube is in the middle of one box. The bee queen will lay eggs in the middle of the box, in the part of hive where bees have spent time during a winter. Usually it is middle of the box in 4-5 frames. During this period bee queen will lay eggs in this middle frames, but very often won’t cross over border frames with fresh collected pollen. So if in the hive are some empty frames it is wise to replace frames and empty frames put closer to the frames with brood.

This simple manipulation consists of:
– Two frames of pollen pull out of the hive
– Two empty frames move on the place from left and right next to the brood frames
– The pollen frames put back in the hive on previous place of empty frames
– Be aware of weather condition and possible very cold nights. After one week check these empty frames you have moved to the place next to brood. If they are from one or both side full of young brood, put this frames in the middle of the hive, and two frames with covered brood put on place of this frames
– Put the sugar bread if there is lack of food, very important is to stimulate bee queen for laying eggs. There is about 45 days before young bee start to fly outside of hive and collect nectar

Check this simulation with explanation.