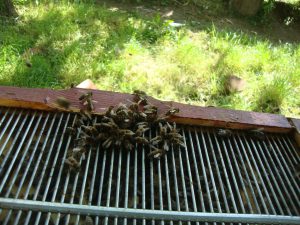 Honeydew honey is highly appreciated honey especially in Europe and parts of Asia due to its specific characteristics, flavor and minerals. Honey is a very dense, often very dark, and because of its density requires special attention during extraction, if a beekeeper delays in extraction it will no longer be possible.

Honeydew is a thick, sticky, very often crystallized sugar liquid that honeybees are collecting from the leaves and branches of trees. Honeydew is the only kind of food in nature that bees collect and producing honey from food of animal origin

What is the origin of honeydew?

Honeydew is the product of the aphids (Aphids – Lachnideae, Coccidae). With his mouth aphids feed on the plant sap, which is located in the vascular system of plants, and aphids leaving secrete a compact, dense, a secretion which is actually honeydew. Honeydew is basically very different from the nectar of plants and for the bees is mush heavier collect it and store in the honeycomb where it further dehydrates. Since the beginning honeydew is much denser than nectar, and has much less liquid, so it has to be extracted on time otherwise it crystallizes in the honeycomb and extraction is impossible. It is a high-quality honey, very rich in minerals, with a high density, it tends to crystallize very fast and often is very dark red or almost black. Aphids often have specific population cycles and in some parts, especially the rich coniferous forests honeydew appears every year, but in some appears in nearly regular cycles of a few years 5-7, depending on the aphids population boom. In those years aphids might do significant damage to forests.